A saltwater hermit crab for sale or marine hermit crab for sale can be a great addition to any saltwater aquarium system. Hermits are often introduced into a saltwater tank because of their “cleaning” or clean up crew reputation.  Hermits can eat different types of algae and debris and aerate your substrate.  This is really great for cleaning your tank once you have started it to cycle.

If you have an algae issue, hermits can help for sure.  In more established marine aquariums they are very useful as well for keeping algae growth in check. Pet hermit crabs for sale are smart and playful little creatures that are definitely fun to watch. We sell a great deal of beautiful hermit crabs as clean up crews that also are decorative parts of the saltwater aquarium fish for sale.

Keeping saltwater hermit crabs is fairly simple, however, there are a few key things you have to take into consideration as with every creature living in your marine aquarium. Like any other living marine animal, proper research is required before purchasing and adding your marine hermit crab to your aquarium.  Once you have explored our entire hermit crab care sheet, consider yourself hermit-educated more than most.

To keep a marine hermit crab, you will need an aquarium that is at least 10 gallons large.  Taller can be better than longer because marine hermit crabs love to climb on rocks so make sure to put some rock in your aquarium. Try to provide around 1-2 pounds of live rock or coral per gallon of water volume. Hermits also prefer some kind of substrate where they can dig around in so either use sand or crushed coral.

Asking yourself what do saltwater hermit crabs eat? Most often found in the aquarium hobby,  species like the Dwarf Blue Leg Hermit Crab and Halloween hermit crab, also known as the Electric Orange Hermit Crab are omnivorous species.  They will eat mostly different type of algae like green hair algae and cyanobacteria, but in case of insufficient algae in your aquarium they can be fed dried seaweed, pellets or some meaty foods.

Most omnivorous species will love some meaty foods like krill, popcorn shrimps or mysis from time to time. These can be frozen, pellets or fresh variants. The dwarf species will often be content with a menu existing of algae and dried seaweed only, but definitely enjoy some meaty foods as well.

When watching your aquarium, you can often see your hermit crabs plucking your live rock but not everything they pluck of your live rock is eaten. After eating, hermits will send a part of it back into the water column in a plume of debris and will re-establish elsewhere.  That is, if the nutrients allowing it to grow aren’t eliminated by your filtration system. 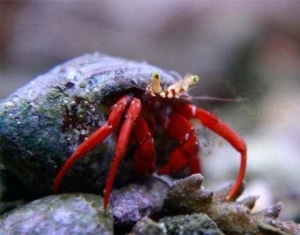 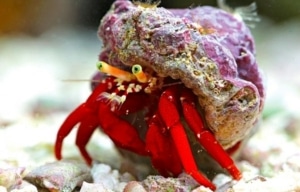 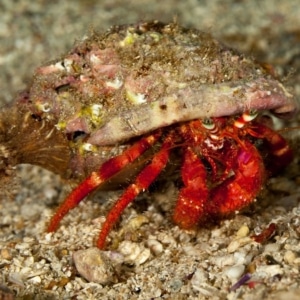 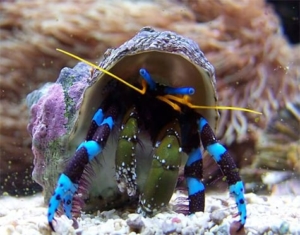 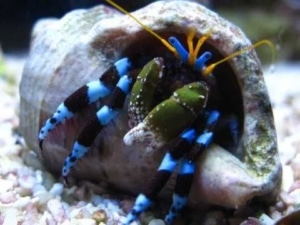 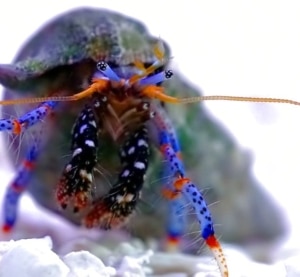 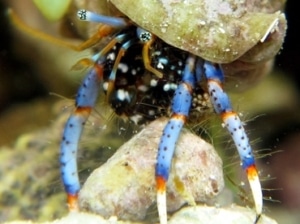 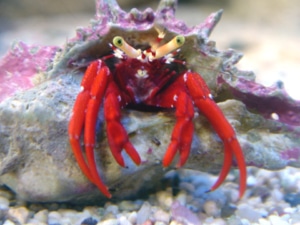 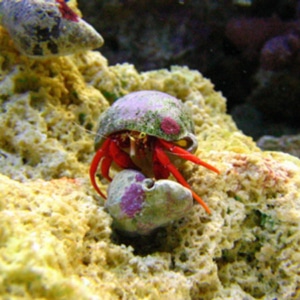