Extreme Gladiators are a variant of the Gladiator Ocellaris that have all three bars connected barring on at least one side. Unlike snowflake barring, the stripes of a Gladiators have smooth edges. 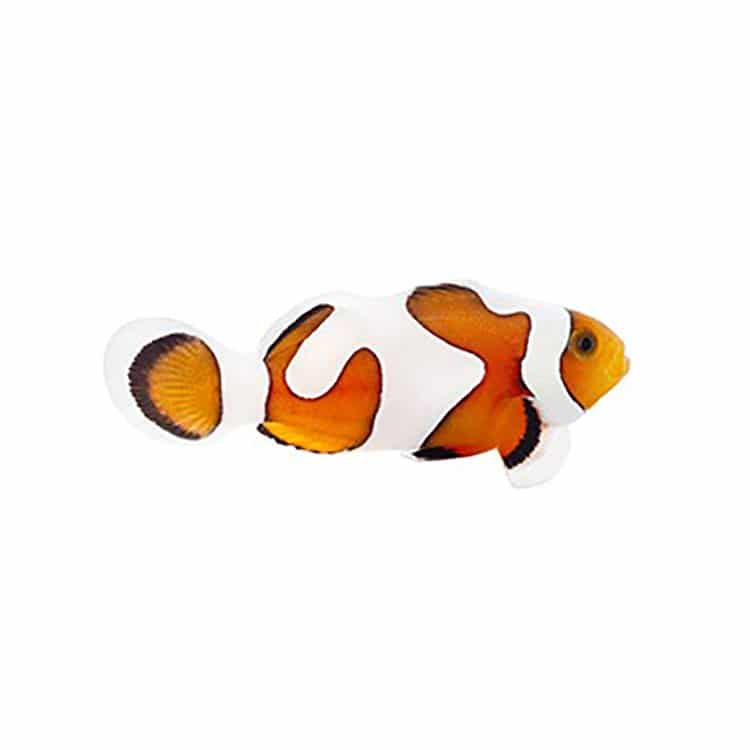 Clownfish originated in Indo-Pacific to Oceania. They tend to stay in this warmer water. They are also found in the waters of northwest Australia, Japan, Indo-Malaysian and southeast Asia. Sea anemone is very important to clownfish. Clownfish can only live in 10/1,000 species of sea anemone.  Thru working with many different clownfish morphs for sale, scientists have created the “gladiator clownfish for sale” as a sustainable clownfish!

Extreme Gladiator Clownfish need a tank that can hold at least 30 gallons of water. Hiding places are a must for clownfish because they make them feel safe. Reef setups are not necessarily a must for clownfish, as they can thrive in a fish-only tank too. Their water must stay between 74 to 78 degrees Fahrenheit and have a specific gravity of 1.020 to 1.024.

The ideal tank conditions for saltwater clownfish for sale depends on the species. In general, an aquarium for these fish must recreate the features of their natural habitat so that the fish will grow up healthy. Consider the following when setting up an aquarium:

Purchasing a pair of extreme gladiator clown fish that have already bonded is the easiest way to breed them. A clean tank, rocks, plants, and anemone encourage breeding. If spawning regularly, the female will lay eggs about every two weeks. Eggs take about 9 days to hatch. Clownfish eggs are typically laid in batches on coral, or next to the anemone they host. The male fish will build a nest to protect the eggs.

Extreme Gladiator Clownfish should not share tanks with aggressive and large fish such as groupers and lionfish, but they are compatible with many other fish. Ocellaris clownfish do relatively well without anemone in captivity and sometimes even if given an anemone in their tank, they will not host it.
Clownfish do well with wrasses, damselfish, tangs, dartfish, angelfish, blennies, puffers, corals, anemones and gobies. One thing to think about is that clownfish will often not get along with others of their kind. If you want to keep more than two clownfish together, it is best to introduce them to the tank at the same time so they do not get territorial. Plenty of room also helps lessen the fighting. If you already have a relatively older clownfish and you buy younger or baby clownfish, you may want to watch out for the older one being aggressive to the new one.

In captivity, Extreme gladiator clownfish tend to live for 3-5 years. In the wild, clownfish can live up to 10 years. The difference is usually the use of the wrong anemone. Only 10/1000 types of anemones are able to house clownfish.

Be the first to review “Extreme Gladiator Clownfish” Cancel reply