Most species of Triggerfish are not reef safe.  Because triggers will feed on hard corals, invertebrates and other marine reef life. Instead, they need aquariums that are equipped with lots of hiding spots or shelters for them to hide in to feel secure.  Also, it is known that even baby Triggerfish have a habit of rearranging their space so be sure most of your rock is secure.  And do not forget that triggerfish are known for moving rocks, etc to their liking so try to keep the rock structures away from the front glass of your tank.

Below you will find some great information regarding the care of the Niger triggerfish for sale.  Our staff marine biologist provides free care sheets for all species of saltwater fish for sale here at SWFS.  Our goal is to provide some of the best saltwater aquarium care guidance free of charge to all of our customers.  Find detailed information on:

Triggerfish for sale can be a friendly fish and has a reputation for having a peaceful demeanor.  It has been known to take on pet-like qualities as well.  It can be trained to take food directly from an owner’s hand and will react excitedly, wagging for attention as a recognizable person approaches the tank.

Triggers can be disruptive at times by rearranging rock work.  More often than not, it has a peaceful disposition and will get along with other tank mates, those that are too large to eat that is.  Always keep an eye out as the fish matures.  They are known to “go rogue” or have temperament changes in what may seem like random times.

It is always easier for the younger triggers to acclimate and keepers have a more successful rate when two are added at the same time, usually to a tank at least over 180 gallons. Older triggers will acclimate but it is a long process to adjust to the surroundings and the keeper.

Unlike many baby triggerfish, this fish typically does well in tanks with coral.  However, this may not be true with other marine life in your tank.  The trigger is endlessly curious and may nip Huma Huma triggerfish for sale is a durable fish, however, and should do well as long as there is plenty of swimming room. Always ensure there is plenty of rockwork and coral branches giving the fish a chance to hide away and rest.

We feed all of our triggerfish a mixed diet of Mysis shrimp, krill, silversides, and other meaty foods.  We also include Angel formula once per week to species that live within coral reefs (most).  Triggers need to be feed often, at least two to three times a day.  Most triggerfish eat basically the same foods.  Triggers should be fed a varied diet consisting of many different types of meaty foods like chopped shrimp, squid, clams or fish.

How often should you feed your baby Triggerfish?

Frequent feeding is recommended for all species of triggerfish.  By feeding often it also reduces the chance that your trigger will “bother” any of its’ tankmates.  We suggest feeding 2-3 times daily, with a suitable healthy diet of meaty foods like prawn, chopped squid, as well as some algae-based frozen cubes. Whether you feed live foods to your Triggerfish is a personal preference.   Some triggerfish hobbyist do not feed live food as they believe it encourages them to be predatory.

Be Careful if trying to hand feed.  Teeth on all triggerfish are very sharp and even when not trying can give you a nip if you’re attempting to hand feed.  Hand-feeding is definitely possible, however, it is dangerous.  Some people use things like a turkey baster for hand feeding to save getting accidentally nipped.

Food that is enriched with vitamins and supplements is very important when keeping triggers in your tank. Since triggers are natural predators it is very important for us to try to replicate their natural diet. For example, when a Trigger eats a shrimp or crab in the wild, it not only will eat the meat but everything else within the animal. By eating the entire prey, the triggerfish is provided with tons of complete nutrition.  Try to feed frozen triggerfish food that is enriched with vitamins and minerals in order for them to get the complete food package they require for long term health.

There are no specialist lighting requirements for any species of marine Triggerfish for sale.   The main thing is to remember that they rest at night so the aquarium should be on a normal day-night cycle with a timer.  Saltwater parameters should be kept stable including salinity level as well as temperatures.

For temperature, we recommend approximately 74-80℉.  For light timing, we recommend 10 hours on, 14 off, however other lighting patterns can be ok.  For PH, shoot for anywhere from 8.1-8.4 will work.  Lastly, salinity should be between 1.020-1.25.  Also, triggers are known as fairly hardy fish, and therefore they will tolerate some salinity fluctuation. Water movement does not really affect the Triggerfish,  so base your water movement upon other species in your fish tank that may require it.

Clowns are of the most sought after triggerfish for sale in the saltwater fish hobby to their beautiful colors and fun “personality”.  These guys are fairly easy to care for, with medium to large specimens being on the easier side of care. Tiny baby Clown trigger fish for sale may be skittish and not adjust as well.  Larger specimens adjust quickly and will often take food the same day they enter their new tank.

It is not understood why babies do not do as well, however it most likely is a result of requiring more feeding times.  Once the nutritional and tank requirements are met, clowns do quite well in a marine aquarium or saltwater fish tank.

Crosshatch triggers are one of the few aquarium Triggerfish that can actually be a pleasure to keep. Crosshatch triggers are rarely aggressive towards their tank mates.  Keep in mind they can bully tankmates that are much smaller or introduced to the tank after the Crosshatch has established its’ territory. If you are looking to keep more than 1 crosshatch in the same aquarium, be sure you are only introducing 1 male to as many females as you wish. Sexually dimorphic, like a clownfish, a Crosshatch Trigger is one of the few triggerfish which you can actually watch go through a sex change, from female to male.

Picasso triggerfish are not recommended for a reef tank.  These guys will feast on your crustaceans and other invertebrates.  Also, they will stay away from stinging anemones but basically will bite everything else in your reef.  Picasso trigger fish for sale are found here at SWFS and are top quality specimens.

Pink tails are the exception when people say triggerfish are difficult to keep in the saltwater fish tank.  Also, a pink tail trigger fish for sale may be a tad difficult to feed when first introduced to the aquarium.  However, once they understand that you are feeding them, and what you are feeding is actually food, they adapt quickly.  Pink Tails enjoy shallow water normally right outside of the reef.  They can be found where the underwater terrain is very rocky, stony with plenty of coral where they can hide. Like all species of marine triggerfish for sale, provide your pink tail with plenty of shelters and swimming room.  Pink tail trigger for sale is a popular species of marine triggerfish.

Humu Humu Triggerfish for sale also have quite a few other names.  Also known as the Rectangular triggerfish the Blacktail, Wedge-Tail, Pig-Nosed, Reef, and even call the Painted Triggerfish.  Like all marine triggerfish in the aquarium, try to reduce aggression towards other tankmates.  This can be done easily, by providing ample swimming room.  Also, provide plenty of hiding spots for shelter that will allow this fish to establish its’ own properly sized territory.

The Niger triggerfish for sale is a beautiful fish that can look a little different depending on mood. Usually, the Niger triggerfish has a completely blue body. The further back on the body you look the softer blue it becomes. This fish can however sometimes display green color as well. The edges of the fins are bright blue. When the fish gets excited, it can vocalize a grunting sound.

Clown triggerfish for sale have fantastic colors, making this species instantly recognizable when seen. The body has dark on the lower half, white spots on the top half.  Below and around its dorsal fin, being yellow with small black freckling. Clown triggerfish are generally masked with a white or yellow stripe crossing over the snout.  A bright yellow mouth, trimmed with a clear white line also is absolutely beautiful.

Juvenile clown triggers for sale have some white spotting on the upper half of the body.  Also on the lower, but these fade away as they reach full adult size. However unlike the adults, the juveniles are rarely seen because of their cryptic habit of hiding in caves and crevices on the reef, so catching sight of a juvenile is a lucky occurrence.

Queen Triggerfish are known as a larger species of Triggerfish.  They can be found in the tropical the Eastern Atlantic ranging south to southern Angola.  Also, you can find queen triggers along the Western Atlantic, from the northern Gulf of Mexico and even all the way south, towards Brazil.  A larger species once full grown, in the wild a Queen Triggerfish gets large.  Did you know that Queens can reach 2 feet in length? Since they’re very powerful swimmers, queen trigger fish for sale will require a large aquarium with adequate swimming area.

Queens are commonly found along rocky or coral areas and sometimes in underwater grass.  They can be found either in schools or solitary. In the wild, queen trigger fish feed on urchins, starfish and other similar prey. They may however eat small fish when they are able to. Queen Triggerfish are very bold and tough feeders.  For this reason and others, queens are known as hardy, easy to keep salt water aquarium fish. Easy to keep, if kept in a very large aquarium (100+ gallons and up for adults) with very good filtration and plenty of water movement. 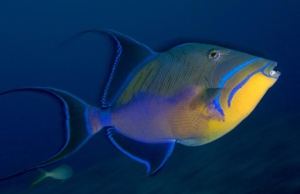 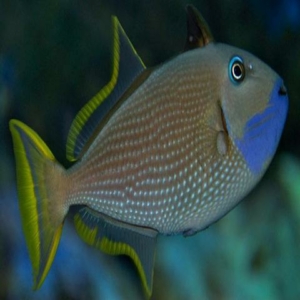 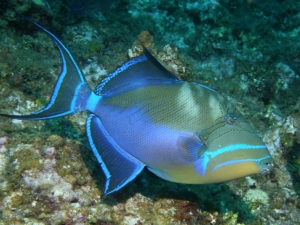 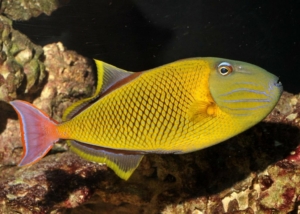 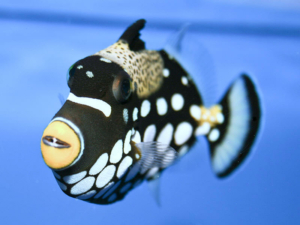 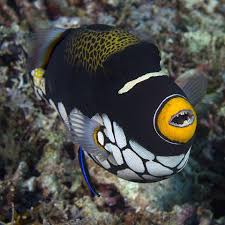 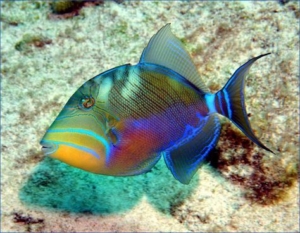 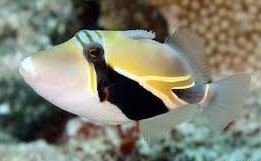 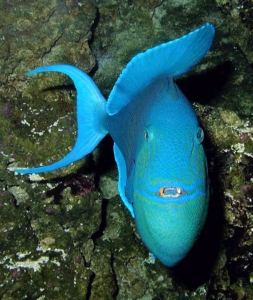 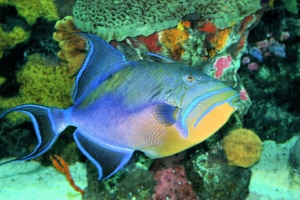